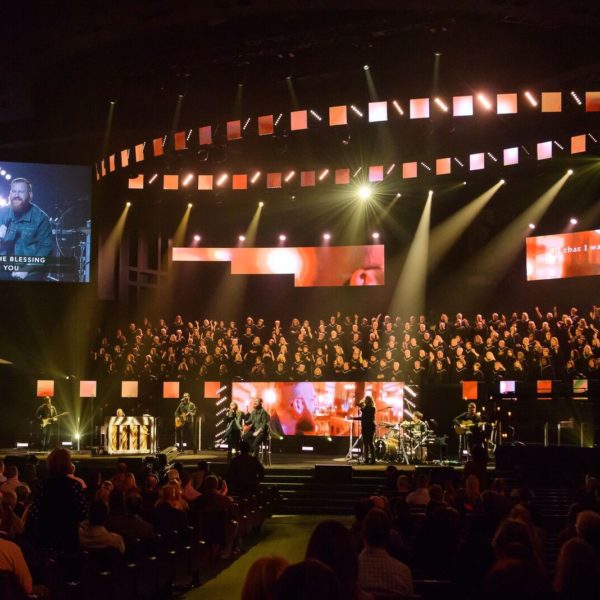 Prestonwood Worship’s second volume of original modern worship music, Songs of the People: Revival, lead to a couple of awesome projects for UVLD’s Matt Webb in 2018. As recording was underway for the EP, Prestonwood’s creative directorAndy Pearson reached out to Webb to tackle production design and Blaine Hogan to direct for a series of music videos for the new project.

“The videos were shot at Brake & Clutch, an industrial event space in Dallas’ Deep Ellum neighborhood,” Webb said. “Knowing that we would have to approach things differently working in the single-camera film medium of this project, I was still keen to feature the heavily-cued bold lighting that Andy and I typically do together.” From that point, the challenge of the project became two-fold. First, we needed to create three distinct looks and visual treatments for the songs we were to shoot. Then we needed to strike a balance between camera and production design. Hogan’s next call was to his go-to DP, Bjorn Amundsen.

For the song ‘This House Is Yours,’ we set out to create a sense of visual scale and lean into the gritty rock current of the song in the capture. Working in the larger of Brake & Clutch’s two spaces, we placed the band around a series of columns, giving ourselves a long alley of three walls to shoot down. Pearson wanted to make sure the visuals pulled the lyrical phrasing into the screen. With the generous real estate we were working with, projection was a natural choice for this video. Using 9 small 5k projectors, we filled large spaces of the walls and projected onto the ceiling and directly on the musicians.

Content designer Jordan Monk created atmospheric visuals that looked great on the surfaces and provided a layer of aerial texture through the haze of the room. Monk then keyed emphasized phrases from the lyrics over the top, accenting key parts of the chorus and bridge. A set of moving lights and LED washes wrapped around the room, creating a star field at the song’s opening and building into dynamic movements and percussive hits. “From there, Blaine really took things and ran with them,” Webb said. “Bjorn key lit the band with Astera Pixel Tubes and Arri 60C’s glowing the band to get them exposed for the camera but maintaining depth in the look.”

For “More Than A Song,” we set up in a more intimate environment in the warehouse, which features a fantastic smaller room with one wall of white-washed brick and another flat grey. “Arumundsen suggested that we shoot with the corner of these walls as our upstage point,” Webb said. “Since we didn’t want to repeat the visuals of the first song, we steered clear of any video projection in the design.” Blaine suggested a great visual reference from a music video that was simply a sofa placed in front of a wall. We ran with this concept and lit the wall from the bottom with lush color gradients. To fill in the space, we placed 24 pixel tubes around the band with additional tubes up-lighting the players. We took advantage of full lighting console control of the tubes to program intricate movement and hits with an intentional,  low-res kind of video quality to them. 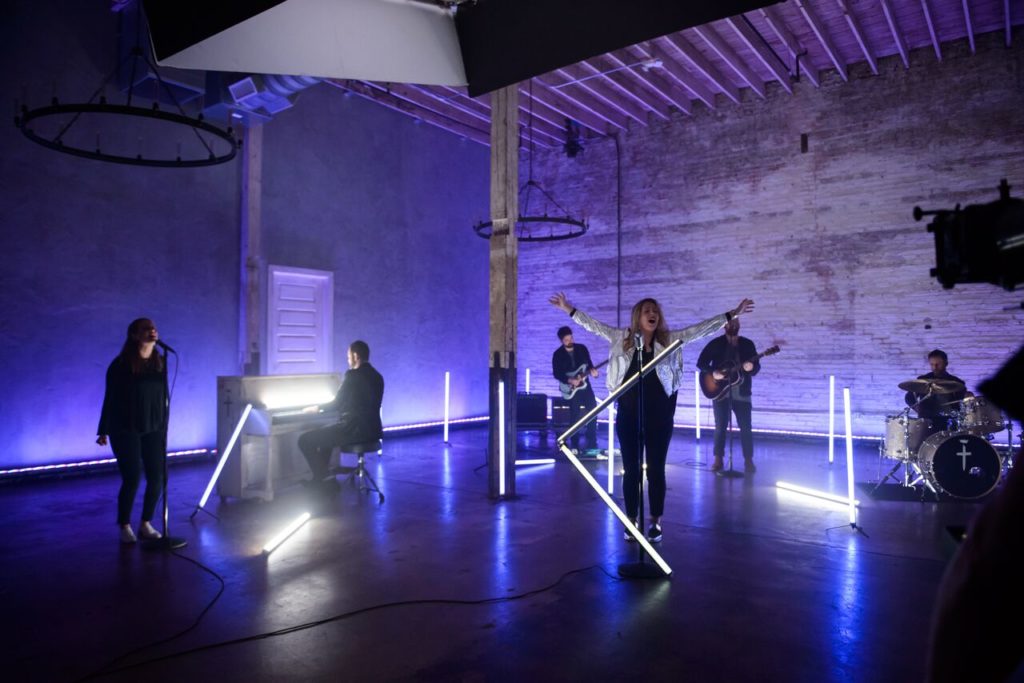 Last of the three songs we shot, “Being With You,” began with a more stripped-down, acoustic feel. Pearson and Hogan were keen to incorporate the context of the Deep Ellum neighborhood. To that end, this video begins with the vocalists at an exterior location; the video follows them as they walk through the streets. Then, as they enter the space in Brake & Clutch, they’re lit with only a single downlight. As the song builds into the final chorus, the room lights up in a heavy tungsten treatment created by Armundsen using the existing chandlers, string lighting, and a large array of fresnel units off the grip truck. 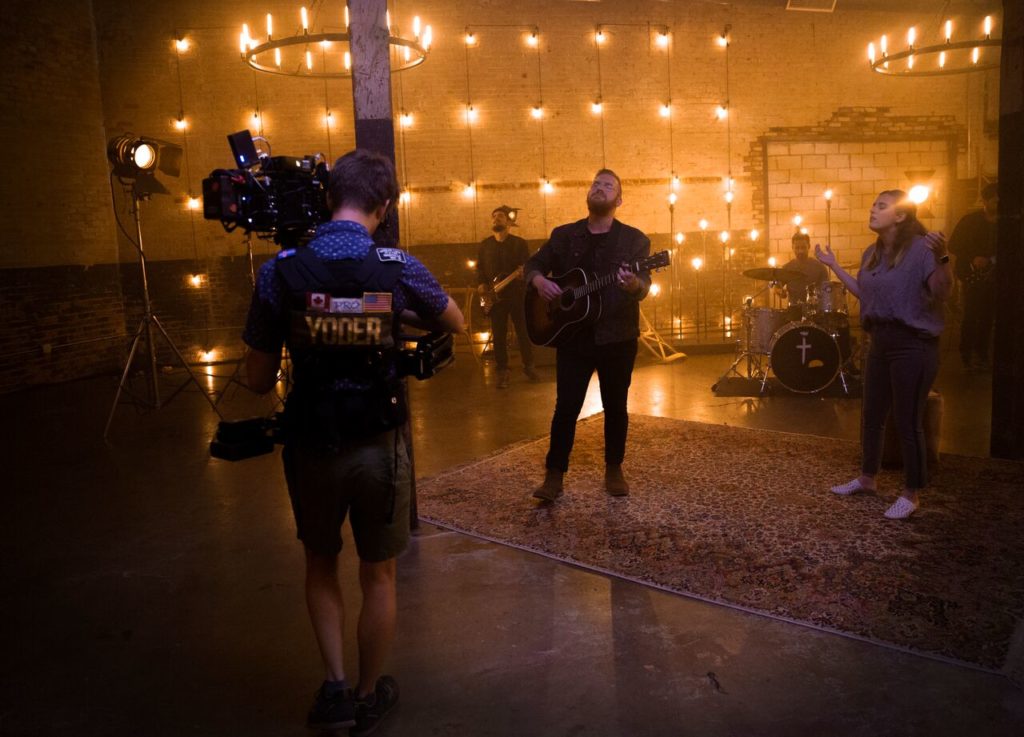 “It was an incredible experience and a real pleasure to stretch into a different realm of design than I typically work in for this project,” Webb said. “The opportunity to collaborate with Hogan and Amundsen was a dream for someone like me, being somewhat foreign to the medium of a film shoot. There’s always a huge team to make something like this happen, especially in three days. Nick Deel with Gemini Stage Lighting was the production electrician, John Dempsey was the gaffer on the camera lighting side with grip, and electrical provided by MPS Film. Prestonwood’s Sieun Ye co-programmed with me on this as well.”

With the EP completed, attention turned to the presentation of a live release of the songs to the church congregation and capturing that experience for further use. Working in the familiar location of Prestonwood’s Worship Center, we shot three services over a weekend to capture a variety of camera angles of the EP’s six songs. Prestonwood’s director of media, Bryan Bailey, took the reins directing the video for these services, using the eight existing cameras plus a few additional film style handheld units. “Working with someone like Bryan in the video director chair is a lighting designers dream,” Webb said of the process. “His original background is lighting, so the shorthand for a great two-way dialogue already exists between us.” 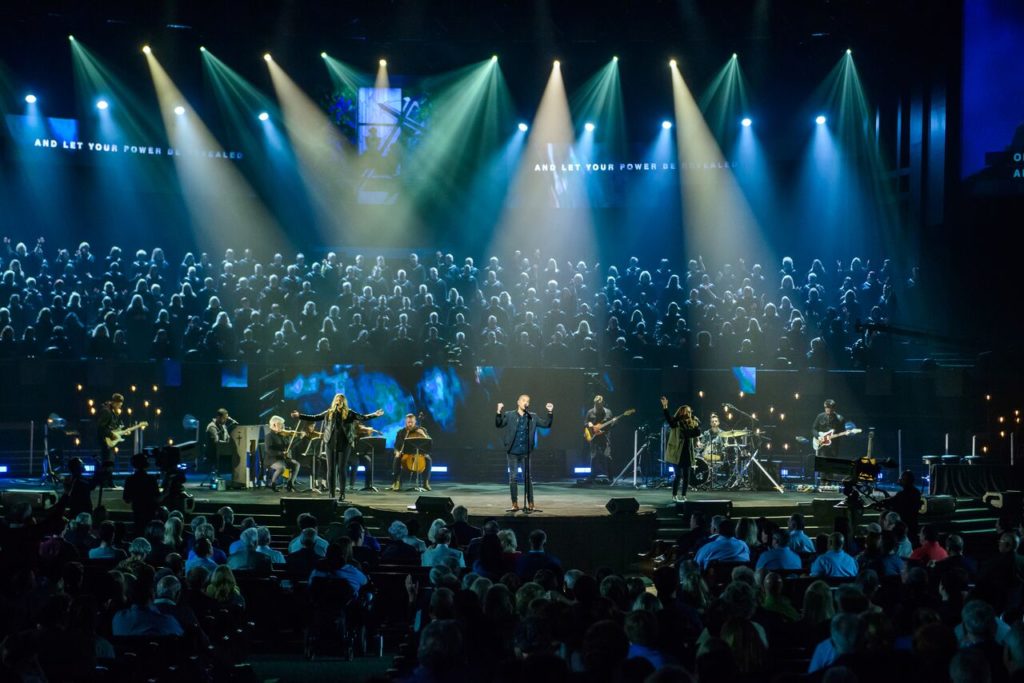 Prestonwood has a solid existing lighting package, and from there we looked to fill in the gaps that a heavy video shoot tends to expose. We treated the audience in color and brought them into the environment, added a floor package to put a bit more pop into the background of the close ups, and created a robust cross-key system to treat the band and additional singers. We used follow spots to key light the lead vocals and Astera tubes to up light all of the vocals and band players.

“One of the ideas Pearson had for the event was to bring some of the visual narrative from the music videos to the live shoot,” Webb said. To this end, the team implemented a similar vertical Astera tube layout for “More Than A Song,” incorporated a lot of tungsten and several carts with light bulbs for “Being With You,” and for “This House Is Yours,” Jordan Monk recreated his visual treatment from the music video on the LED walls. 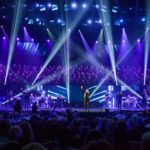 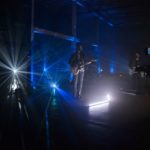 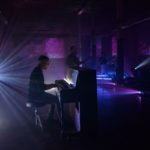 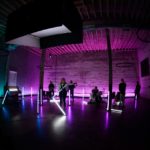 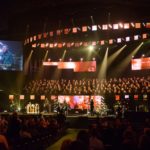 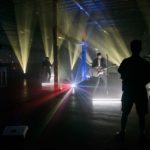 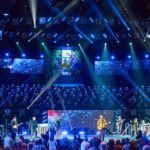