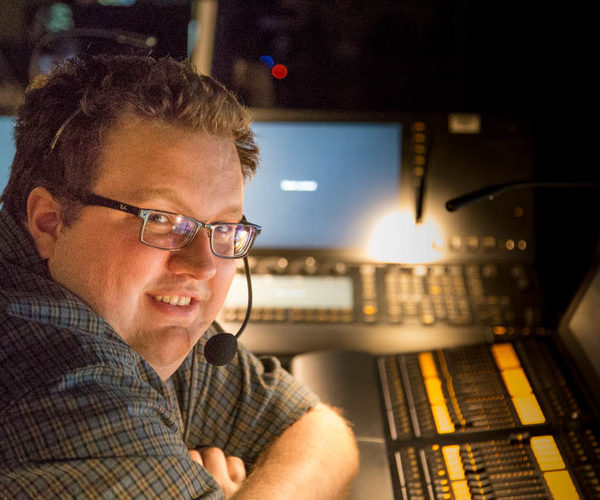 Entering the industry at a late age–thirteen–Matt began programming lighting for his church in Dallas. Realizing he had a knack for lighting, Matt began freelancing in the Dallas church and corporate markets. Soon he met Cameron Yeary and freelanced for UVLD as a programmer. In 2012, Matt joined UVLD as a design partner.

Beyond programming, Matt’s work has broadened into lighting design on many projects. His ability to program for many of his designs has expanded his portfolio of projects, and he has proved to offer a great resource for shows that cannot afford the cost of an additional programmer. In the church market, he has been designing shows for Prestonwood Baptist Church for over ten years, and, since 2010, he has been the production & lighting designer for “The Gift of Christmas” for which he won a Telly award. Other church clients have included First Baptist Church Dallas and Fellowship Church’s satellite campuses. He has also lit many live broadcasts for several Christian Television Networks. Matt was recently the lighting designer for Women of Faith’s 2013 tour, “Believe God Can Do Anything.”

Matt’s background as a lighting designer has encouraged him to embrace visual media as a signature part of his repertoire. Indeed, he began working in the production industry as the media server and lighting convergence collaboration began and has witnessed the growth of this unique discipline firsthand.

He has served as the Visual Media Director on projects like Univision’s H2O music festivals in Los Angles and Dallas and in delivering content for artists such as Snoop Dogg, Weezer, John Legend, Paulina Rubio, Juanes, and Gym Class Heroes. He has worked on the Essence Music Festival from 2010 through 2012, each year pushing the integration of all video elements further. Matt was the Visual Media Director for March Madness Music Festival the last several years, working with both artists and sponsor creative agencies to coordinate video production and media playback needs.

With the growth of media servers grows to control multiple live inputs and increasing variation of the sizing and shapes for screens, Matt has pioneered the evolving relationship between camera directors and their placement in live media spaces, including such elements as wide format screens and low resolution destinations.

Matt lives in Dallas, Texas with his wife and their new baby. He enjoys going to Rangers games thought the summer.