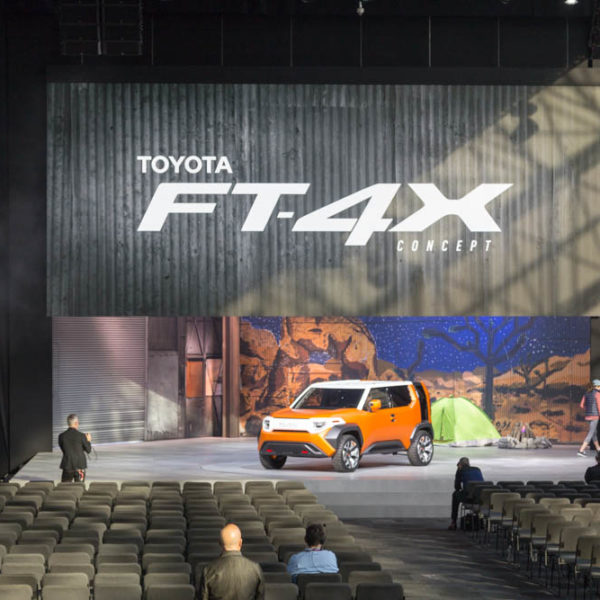 This was a freaking cool one. O2 Creative Solutions, lead by creative director Alex Alexandrian and CEO Brian Hords, transformed the River Pavilion at the Javits Center into a warehouse to reveal Toyota’s 4×4 concept for the millennial “Casual Core” consumer.  What is Casual Core?

A shift from multi-day, extreme, high-effort excursions to brief, unplanned, casual adventures is an overwhelming reality for Generation Y. Millennials are fond of the outdoors, but operate almost always indoors. They enjoy venturing into to new neighborhoods and national parks, but hardly plan ahead. Their countless interactions on social media bring inspiration. It is the busyness of their nonstop daily lives that pushes them past the precipice of “liking” a digital snapshot into the realm of creating their own, in reality. (Source: Toyota)

Our show began with performers running to the stage, then beginning to sketch out the initial lines of the design by painting graffiti lines on the LED wall. The screen flew to reveal the vehicle itself as the actors escaped on a spontaneous journey to a weekend of skiing, camping and breakdancing.

The car is really cool, and looks different than anything we’ve worked on. Lighting Designer Gregory Cohen and programmer Kevin Lawson were able to preserve the dramatic lighting needed for the opening of the reveal while incorporating camera friendly illumination for the press. Peter Crawford’s set gave us great separation, and the art direction made the warehouse realistic but clutter-free.

“What made the show different was more than just the cool 4×4,” notes Cohen. “The energy the cast brought to the show gave the whole thing a live, unscripted feel which is unique for New York. It engaged the press and made them anticipate the reveal in a unique way.” 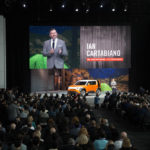 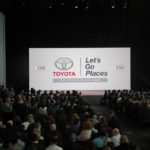 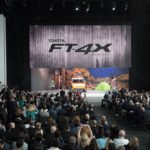 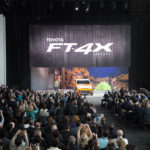 The gear was from TLS, Alice Perlmutter was the production stage manager, Todd Latia was production electrician. The show was produced by George P Johnson / Rick Voigt.  Jon Harrington was the technical director.