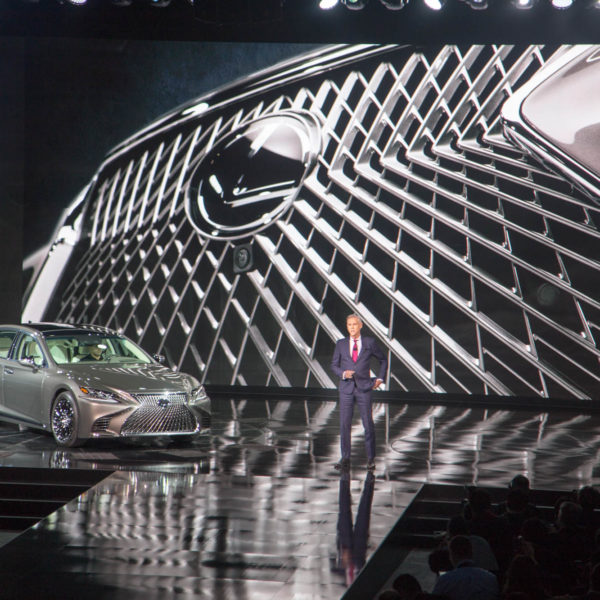 O2 Creative Solutions led the production team of George P. Johnson to produce the Lexus LS launch at the North American International Auto Show in the Motor City. UVLD was thrilled to be on the team. Featuring breathtaking high-res and low-res graphics, the scenic design, created by Peter Crawford, allowed both the cars and executives to blend seamlessly with the branded messaging. The cold temperatures outside allowed the onsite staff, consisting of UVLD’s Greg Cohen, programmer Kevin Lawson, head electrician Jeff Quinn, and assistant Todd Latia the opportunity to briskly travel to work each day debating the relative efficacies of both their base layers and their outer garments.

This year’s show, in contrast to the frigid weather, was hot, and featured a treatment imagining the development of the new luxury sedan as being forged by fire, with a wide-screen video reveal showing an engineer directing red hot flames to form the distinctive silhouette of the vehicle. As the car approached the stage, a ring of Geyser RGB smoke effects circled the turntable, bringing the fire of the video live to the stage. The O2 team was lead by Alex Alexandrian and Brian Hords.

“Lexus is a luxury brand,” notes Cohen. “And at O2’s direction, we reflected that in the lighting. Although the reveal itself involved smoke, we were uncharacteristically restrained in its volume. The walk-in and executive looks were clean and simple, drawing focus to the product itself.”

Rick Voigt was the executive producer, with Jon Harrington serving as technical director. Alice Perlmutter was the production stage manager with ASM Julia Thudium keeping the executives from wandering off. Gear was from TLS.