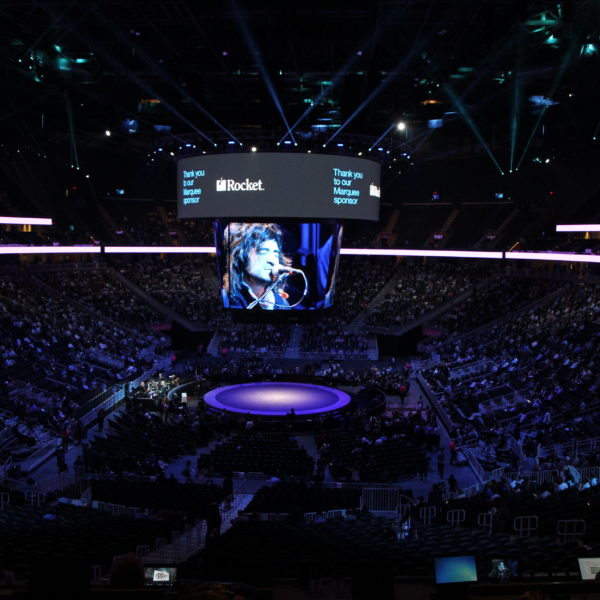 UVLD was invited by integrated communications agency  Drury Design Dynamics to design lighting and deliver media for the IBM World of Watson conference. The conference, held in October 2016 in Las Vegas, brought together IBM partners and clients to explore how Watson can help solve the world’s biggest challenges and invited academics, architects, data scientists, developers, engineers, inventors and business leaders to the conversation.

Known for producing some of the largest events in the industry, Drury once again hit a home run. This event was the first enterprise-sized corporate event in one of the most talked venue of the year: the T-Mobile Arena. Working in unexplored and untested venues didn’t scare Drury away. In addition to the flagship general session, they also produced a wide array of events across multiple venues from the 20,000 seat T-Mobile Arena to 70-seat micro theaters at the Mandalay Bay Conference Center.

The events at the arena were highlighted by a session led by IBM Chairperson, President and CEO, Ginni Rometty. Her guests included General Motors Chairperson and CEO Mary Barra and US Secretary of Education, John King Jr.  Under the direction of Chief Creative Officer Chris Drury, scenic designer Jerrod Smith of Designsmith Collaborative created a show in the round that relied heavily on LED screens to define the space. Supplementing the existing LED scoreboard and rings, a 55’ diameter by 13’ wide circular LED screen was hung above the existing scoreboard. To top if off, the circular stage was also a large LED screen.

UVLD Visual Media Developer Cameron Yeary coordinated the delivery of content to the complex pixel space. To overcome the challenges presented by the uncommon blending of existing venue equipment with a custom screen installation, Yeary turned to media servers from d3 Technologies. “The venue is new, and we were the first event to take over all of the screen spaces,” explains Yeary. “Because the exact pixel specs weren’t available, the ability to change 3D mapping dynamically while programming onsite made the d3s the perfect choice for this project.”

UVLD Founding Partner John Ingram balanced the needs of a large arena lighting system with an unusually challenging load-in schedule. Coupled with the need for exacting sight lines to the multiple video surfaces and the presenters’ stage Ingram and UVLD Lighting Designer David Rees worked extensively in a 3D model of the room to find the appropriate positions and trims.

“One of our trusses was trimming within 18 inches of the venue audio array,” explains Rees. “The ability to position Renderworks cameras in various location of the 3D model allowed us to maintain safe clearances while provided the best possible sightlines to attendees.”

Despite the 120’ height of the venue, Ingram found that only 4 vertical feet were available between the LED cylinder and the audio system. A 70-foot diameter circle truss populated with Vari*Lite VL3500 Wash as houselight and Clay Paky Mythos for effects and beamage fit neatly into the space allotted. Vari*Lite VL4000 Spots hung from prehung Christie Lites F Type Truss acted as key light for the stage. Clay Paky Sharpys, Martin Mac Quantum Wash, TMB Solaris Flare, as well as 6 follow spots rounded out the lighting system which was provided by Bob Gaynor with 4Wall Las Vegas.

For the final night of the conference, IBM sponsored a party with a headlining performance by Imagine Dragons. UVLDs David Rees supervised lighting of the prefunction party located in the Samsung Plaza outside the arena. Drury Producer Laurence Pevard and Technical Director Steve Lemon led the team in the plaza. While attendees enjoyed dining from the wide array of food trucks, a DJ entertained the crowd before they entered the arena for the concert. LMG, Inc provided a package of Clay Paky Sharpys, Martin Mac Auras and Mac Axioms installed by LMG’s George Clayton to light the plaza.

The conference’s venues extended beyond the arena to the Mandalay Bay Conference Center. Drury Producer Maxine Monsegue led the team providing support for additional keynote sessions. UVLD’s Branden Roth and David Rees were part of the team in the Mandalay Bay Ballroom while Jeff Nellis lit the stage in the South Seas Ballroom. In the Mandalay Ballroom Roth led the content distribution team. With a total of eight sessions packed into 2 days, the ability to respond quickly to various client needs was critical. Roth used TMS custom built media servers to handle a total of five 1080p inputs composited to a four projector wide blend. 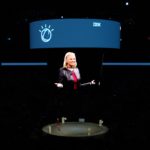 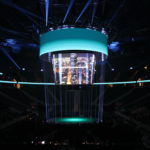 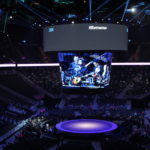 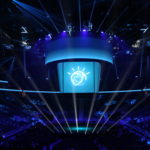