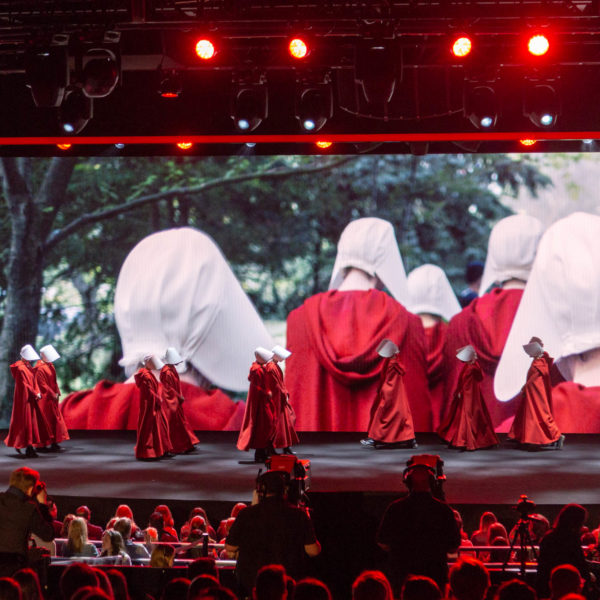 Ok, let’s not bury the bury the lede here – Handmaid’s Tale has been renewed for Season 3! And you can soon download your Hulu shows so you can watch them on the plane!

At their 2018 upfront, Hulu had a lot more to talk about, and we were back on the VPP team. Director Jim Piccirillo and Executive Producer Erin Phibbs pulled off a flawless show which featured the live in-person casts of many of Hulu’s properties as well as pre-taped segments from the likes of visually charismatic George Clooney.

Set Designer Andi Blady created an environment consisting of three upstage high-res LED screens as well as offstage low-res tubes. She also devised an illuminated frame which created a box-within-a-box onstage, placing the talent within a screen frame visually. Production Glue’s Mark Eis was the technical director, with Tom Bussey, Glue’s founder and CEO overseeing the production as a whole.

In the theater, Gregory Cohen was the lighting designer, the scenery and lobby production was by Atomic Design. The entire event was produced by Maggie Swisher.

“I love doing this show,” notes UVLD founding partner Gregory Cohen. “It’s a great group of people with exacting standards. Jim demands a show that looks great on tape as well as live in the room.”  Using Follow-Me remote follow spots worked out well for the show. “We were able to have a consistent key light on the talent from a Clay Paky Scenius, as well as a great looking back spot, which is always a challenge in that room. The crew got up to speed instantly and we were able to deliver a perfect image for camera.”

UVLD’s senior partner John Ingram supervised the pre-production and the selection of Follow-Me.

Key to the perfect image was Kevin Lawson as the programmer. Tom Blancato was the head electrician, assisted by Tom Thayer. We were, as always, thankful to have an awesome crew from Local 1. And we’re not just saying that. The gear from form 4 Wall, and our account executive was Bob Looney. He hates being called an account executive.