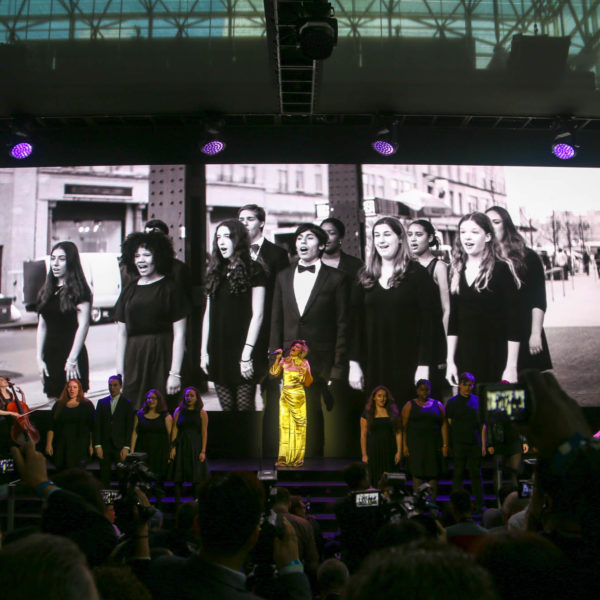 Before the reveal, the stage appeared shallow and simple.

One of the more collaborative press events, it also served as the world premier for “Amen,” the new single from Grammy-nominated Andra Day, and centered on a carefully crafted video which, as the song built, featured various musicians in iconic New York scenes. As they came alive one by one on the big screen, the same musicians appeared in various spots in the house, leading to Ms. Day herself stepping ‘into’ the video on the first big chorus. Near the end, the LED wall lifted out of sight while she stepped down to reveal the GV80.

The lighting was especially tricky because of the isolation needed to light the musicians without contaminating the LED screen or reveal other performers moving into place.

“I was on edge, because I was within inches on coverage,” said Sharwell, “Lighting geeks would appreciate the use of temp-faders for pan/tilt work as well as shutter cuts.”

Paul worked closely with the creative team and relied heavily on the tight choreography of music director Printz Board and the precise timing of stage manager Jon Allen.

“The biggest challenge was that everything was worked out without the most critical elements,” said Sharwell. “The car arrived in the wee hours, and Sandra Day arrived hours before the show, so the actual live event was the first time we saw the reveal with the proper stars!”