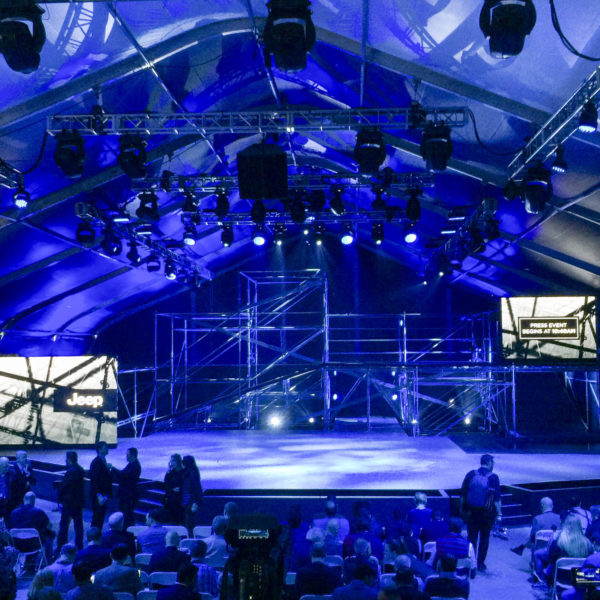 12.06.16 Alfa Romeo and Jeep: Separately Together in Los Angeles

Unique to this year, FCA decided to execute launches for the two brands in the same space: a tent constructed at the entrance to the convention center. This allowed complete control over the environment, without having the traditional challenges of ambient light and noise from other manufacturers.

But sharing a space created a new challenge. Alfa Romeo and Jeep are two very different brands, and each event needed to have a distinct look.

Scenic designer Helene Harley Kenny created two environments. Alfa Romeo was an unambiguously elegant black-and-red display reflecting the legendarily sleek design of the brand. Jeep was as rugged as Alfa Romeo was refined: the set was made from scaffolding and the scenic treatment evoked the off-road capability for which the vehicles are known.

Alfa Romeo showcased two new vehicles: the Giulia and the automaker’s first-ever SUV, the Stelvio. An understated red look greeted reporters during the walk in, until the cars materialized in dynamic and exciting reveals synced with video and bursts of moving light.

Jeep also revealed two cars: the Jeep Compass Limited and the Jeep Compass Trailhawk. Working with programmer Matthew Piercy, John created a richly saturated blue look for the event, with lighting that precisely followed the vehicles up and down ramps built into the steely set and through a large pool of water on the deck.

The O2 team was lead by Executive Creative Director Brian Hords, Executive Producer Laura Leigh, and show caller Gretchen Van Horne.  Chris Dowling was the technical director and did a fantastic job of helping us make the magic happen. 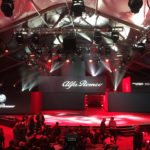 Alfa Romeo was Red and Black 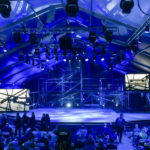 Jeep had a steel blue look 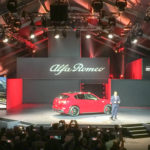 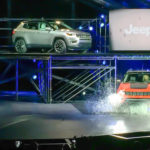 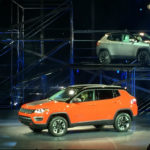