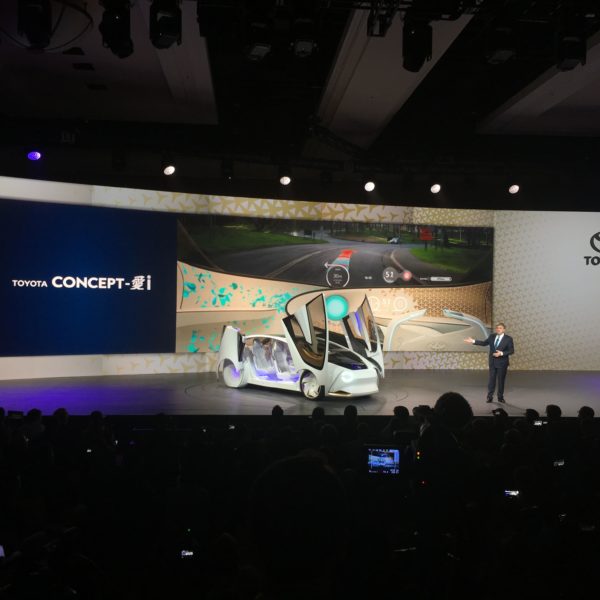 At the 2017 Consumer Electronics Show (CES) in Las Vegas this January, Toyota unveiled its plan for self-driving cars through its new concept car, Concept-i. The ambitious design of the car is a reinvention of everything we know about performance, safety and navigation and integrates these into a space-age design.

The team for this show was lead by O2 Creative Solutions, with Brian Hords at the helm. The show was produced by Kim Polito, Alex Alexanian served as Creative Director, and Johnny Washam as production electrician. Paul Sharwell was the lighting designer.

The reveal began with Toyota executive Bob Carter interacting humorously with the brain of the car, a Siri-like character named Yui, on the big screen. At one point he asked Yui to explain the car, leading into an exciting module with a short light show. The imagery on the main screen bounced around the screen, then down to a cocoon-like sheet stretched over the car. Video projection on the sheet came alive as the light show built, leading to a quick pull of the sheet, unveiling the car.

“O2 asked for drama in the lighting,”  Sharwell said, “and I was thrilled to provide it. I felt strongly that the light beams needed to be prominent but I didn’t want to risk puffy clouds of haze, so we used a DF-50 in the back corner of the room to ‘thicken’ the air without being an obvious source of haze. The projection on the car looked so cool that – I have to confess – I wish it went on longer.”

After the introduction of the car, the head of Nissan Research gave a fascinating presentation on autonomous cars, covering all the factors involved, standards for self-driving cars and the different levels of autonomy that Toyota and other players are working towards.

“I really enjoy doing this kind of press event at CES,” Sharwell said. “It’s a welcome change of pace from doing a press event at a large auto show; the more controlled and less chaotic environment truly enables creativity for the whole production.” 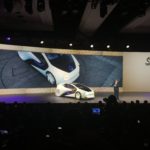 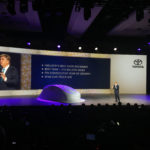 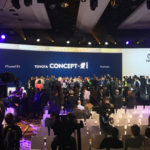 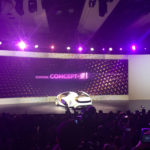 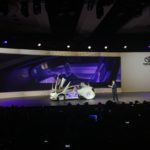