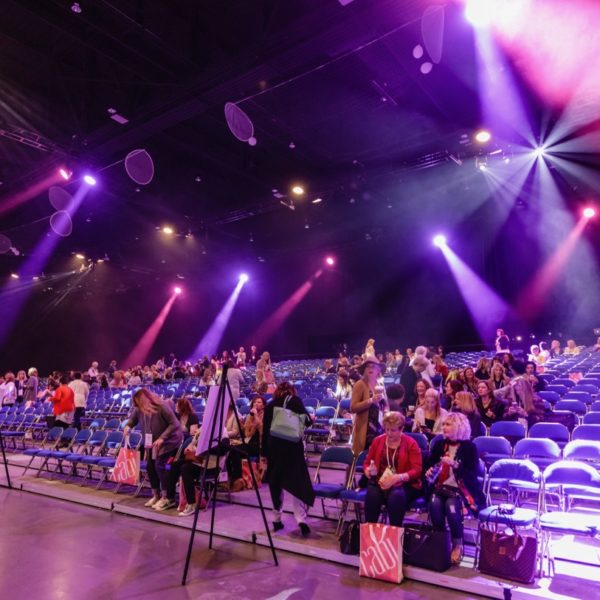 In July 2017, UVLD’s Paul Sharwell lit his 22nd Cabi Scoop in 11 years. The event, which features upscale women’s clothing company Cabi‘s unveiling of their latest line, was produced by event and communication agency One Smooth Stone and took place at the at the Gaylord Opryland in Nashville, TN, with Chris Nye as ME and Michelle Morin as his assistant.

“I remember the first Scoop, in a theatre – we used a pile of lekos and 12 moving lights in the air,” said Sharwell. “Now we use 58 movers just for the stage wash, and the fixture count is in the hundreds.”

The highlight of the week is the fashion show, where the much-anticipated next line of clothing is unveiled.

Producers Stephanie Selig and Mark Ledogar hoped for a similar configuration to the most recent Scoop: a 180’ runway with entrances at each end and bleachers on both sides to keep every seat as close as possible to the runway, but the size and weight limits of the Delta Ballroom created new physical challenges.

“In the early days, we did a number of Scoops in Opryland,” said Sharwell, “but over the years the show has grown immensely, so returning here after playing convention centers creates many new challenges, beginning with just fitting it in the room.”

The main priority for the fashion show is to make the clothes shine from every angle, both to the audience and to cameras. “The stage wash has budget priority as well as rigging priority, even more than usual,” Sharwell said, “The show video doesn’t get put on a shelf, it lives on the front page of Cabi’s site until the next Scoop.”