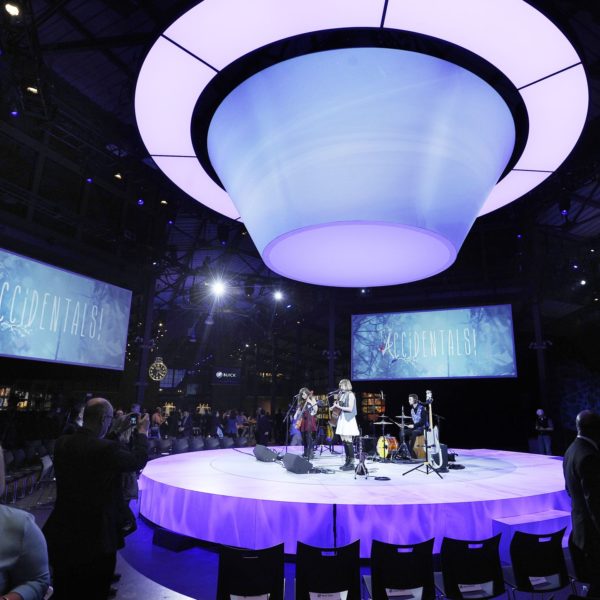 For Buick’s reveal of their ground breaking concept car — the Avista — producer Aquilla Productions called upon UVLD’s Cameron Yeary to deliver content on a challenging geometry: a circular cone of video above a stage set in the round. Set Designer Patrick Fahey came up with an amazing design which was treated with 6 projectors spaced out in a circle at 60-degree increments.

Typically UVLD would have called for converged projections for redundancy and brightness, but with the complex shape the team realized that time might not permit focusing a double stack of projections. Media Solutions provided DPI Titan Quads which are 20k lumens and have 4 lamps, minimizing the impact of a lamp failure.

Yeary notes that construction methods created a challenge onsite: “We realized that the fabric that made the cone was stretched instead of placed on a substrate, which meant it had a tendency to hourglass.”

For this project, like so many others, Yeary used Coolux’s Pandora platform and was able to use its advanced tools to solve the anomaly. By adding another warp pass in the 3d model, Yeary was able to correct it initially, but found that the shape of the cone actually changed daily. Using the PB Live Warp feature in Pandora, “we were able to correct this every day with 3 people working on the same system to do it fast and quick.”

Cameron Yeary was Visual Media Developer, Branden Roth was the media programmer and Chad Yeary was the server tech.