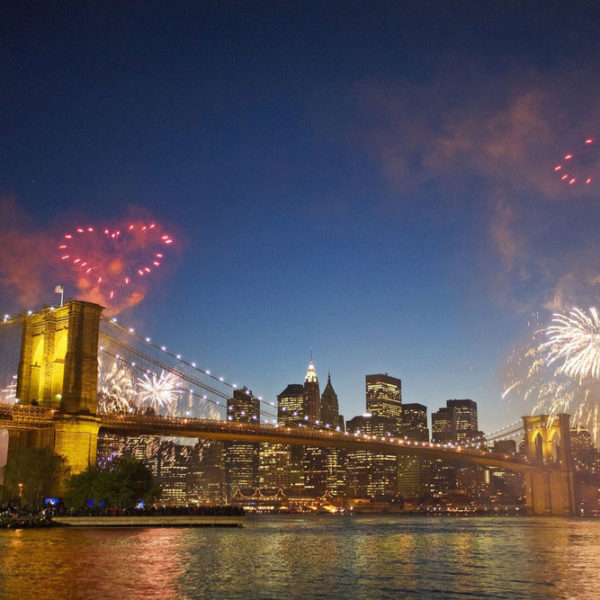 UVLD partnered with production glue to mark the 125th birthday of The Brooklyn Bridge with a dramatic Syncrolite lighting treatment during a five-day celebration of the iconic structure.

“The story of The Brooklyn Bridge is inextricably linked to that of our city. It’s unique in the history of architecture, a gateway for transportation, and a symbol of our economic vibrancy. For all of us, it is, without question, a part of New York,” says UVLD lighting designer Greg Cohen.

“We wanted to find a dynamic way to tell the bridge’s story while providing a visual punctuation to the 125th birthday observation,” he adds.

Producer Jennifer Kurland of production glue notes: “This was a very upbeat moment for the City, one that celebrated the bridge in the way it deserves. Spectators heard a performance by the Brooklyn Philharmonic followed by a Grucci fireworks display. At that time, Mayor Bloomberg turned on our lighting installation which spanned the length of the bridge illuminating the East River cityscape from 9 to 11 pm daily through the Memorial Day weekend.”

Working in tandem with production glue, UVLD installed 24 Syncrolite XL 10 10K luminaries on the bridge center and tower anchors, six Syncrolite SB 5Ks on the Brooklyn Tower anchor scaffolding, and six Syncrolite SB 5/3 on the Brooklyn shore. Most of the five-foot tall lights, which weigh in at 320 lbs each, were positioned on the bridge’s guardrail between the roadway and the pedestrian walkway. Staggered on both sides, the lights zigzaged across the bridge span.

“The biggest challenge was working in a public space, and a highly-trafficked public space at that,” says Kurland. “We had to design production so it wouldn’t impede the pedestrian walkway which remained open to walkers and bike-riders throughout the installation. And we worked closely with city agencies to minimize impact on the public and maintain security on the bridge.”

Using the Syncrolites enabled Cohen and fellow UVLD principal John Ingram to combine the impressive look of searchlights with an expanded creative palette.

The Syncrolite rigs are controlled by a grandMA lighting console and were provided by Syncrolite of Dallas, Texas. Tom Blancato served as production electrician and David Arch as programmer. Tom Bussey, principal of production glue, was the staging producer.