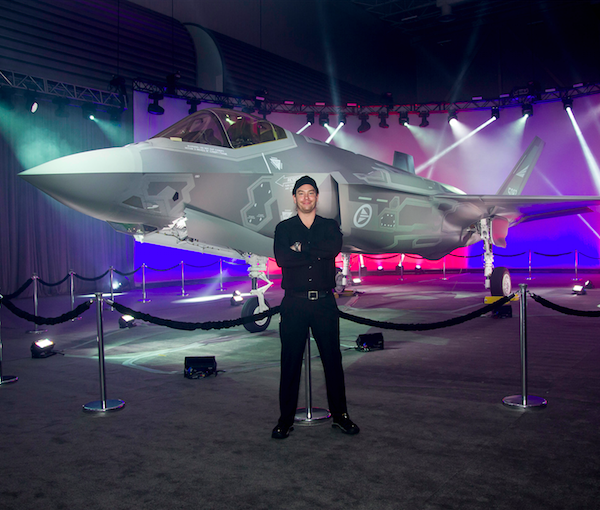 Hey, everyone! Meet Kevin. Kevin has worked on projects with UVLD for four years, and he’s been working with us exclusively for a year now. Kevin brings a unique skill set to his work at UVLD, and his perspective makes him invaluable. His specialization in media servers is rooted in over a decade of experience, and in an earlier iteration of his career he worked as both a manufacturer and a product vendor.

In the past year, Kevin has worked on some exciting projects with UVLD, including the Hershey’s annual rebranding conference and the unveiling of the Lockheed Martin F35 for the Norwegian Air Force (pictured below).  He also worked on the DISH Network’s big annual conference, three pharmaceutical releases for AstraZeneca, the release of the Cadillac GT6 for General Motors, the IBM Interconnect conference, and the pre-game and half-time court projection for NBA all-star game.

Kevin Morris at the unveiling of the Lockheed Martin F35 for the Norwegian Air Force.

As a technician, Kevin is an old hand with projection mapping and was deeply involved in the transition from analog to digital video. His breadth of work in the industry highlights his wide range of abilities, and the scope of his client portfolio speaks for itself.

Since starting his career, Kevin has returned to his roots in Baltimore, where he enjoys staying out of trouble except when absolutely necessary.